Ngimbi (Luve) Bakambana was born in Kinshasa, DRC in 1977 and trained at L’Academie des Beaux Arts, Kinshasa. He is also educated in music at the Conservatoire de Nanterre, France. He lives and works in Paris, France.
Bakambana is among the first of his generation to have exhibited with the ‘masters’ of Congolese art such as Mavinga, Chéri Samba, Nginamau, Lema Kusa, Liyolo, Botembe, François Tamba Ndembe in DRC and in Germany. François Tamba Ndembe, one of the foremost Congolese sculptors, forward thinker and the most affecting artist by the shapes and mastery of his composition, was his mentor in art.
In his expressionistic approach to art, Bakambana leverages colour to intimate what words express in verbal communication. He is inspired by the social context of his native Congo which serves to express his thoughts and understanding of the world through colours.
Bakambana’s paintings are a form of pictorial sociology of the SAPE1 culture centred in the two Congos, and which is reminiscent of Dandy and Rudeboy cultures found elsewhere. Sapology is a state of mind and a set of behaviours and attitudes rooted in urbanity, and embodied in the “Kitendi Religion”, a concept that links the principles of religion to the social uses of fabrics and fashion – ‘a religion of fabrics and fashions’ in other words. In the difficult context of war and hardship, Sapology offers a window of hope and joy, of rehabilitating oneself through fabrics and fashion that are worn to be seen. It is a sort of social exorcism characterised by eccentricity.
In his creative process, Bakambana borrows from various sources that allow him to venture in a chromatic universe, at once philosophical and historical, intertwining pictorial finds from ancient Egypt to Jazz, and parsing them through the expressionist world view of the Sapologues, who are themselves inspired by their environment, including advertisement posters and everything that is imbued with colour. The Sapologues speak of a trilogy of completed and uncompleted colours (Red, Yellow and Blue), which are the three primary colours from a painter’s point of view. They look for a harmony of colours and build a harmony of passions, they speak of ‘feasts’ that constitute a reconciliation and joy. Their clothing in turn reflects a conciliation of colours and aspirations. As an Expressionist himself, Bakambana considers the Sapologues to be Fabric Expressionists. 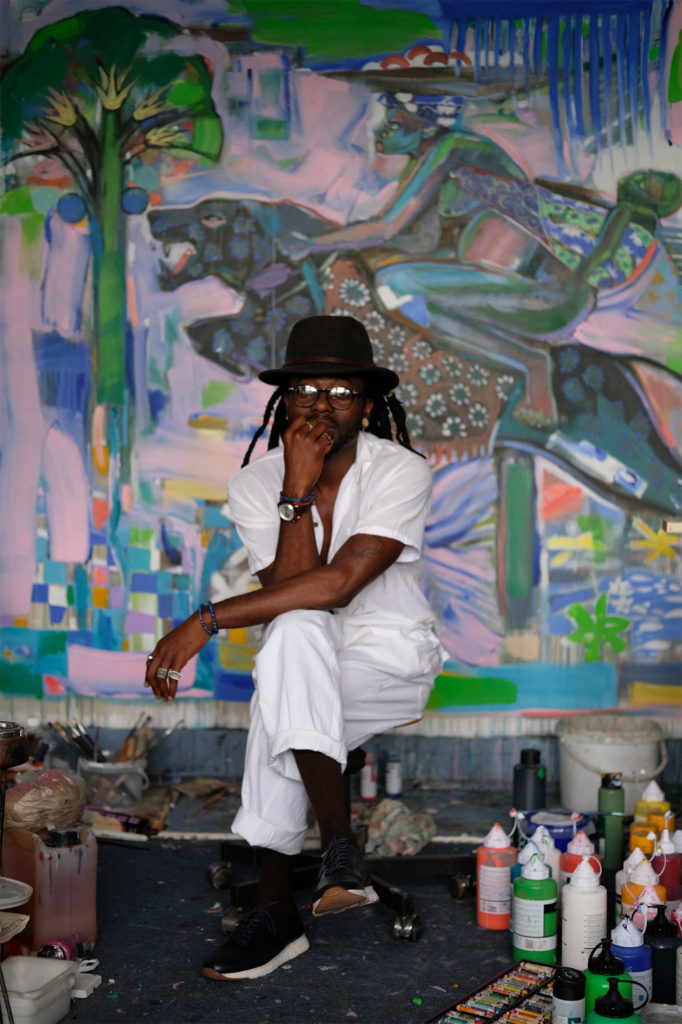 The intimate mixture of threads, of fibers, can be considered as a metaphor of weaving, which creates a fluid and welded matter,